A Canadian ski resort was forced to shut down after officials confirmed more than 800 cases of the highly contagious Brazil COVID-19 variant in British Columbia.

The Whistler Blackcomb resort was shut down by officials in the province of British Columbia on March 29.

‘We were just informed today by the Province of British Columbia that Whistler Blackcomb has been ordered to close as of midnight tonight,’ the resort tweeted last month.

The province has confirmed 877 cases of the P.1 variant, with nearly a quarter of those cases being linked to Whistler, according to The Guardian. At least 84 people who visited the ski resort tested positive for the variant but did not report any travel outside of Canada. It’s still unclear how the variant arrived to the resort.

The P.1 outbreak represents the largest cluster outside of Brazil. Of those infected people, 215 are still sick.

Scroll down for video 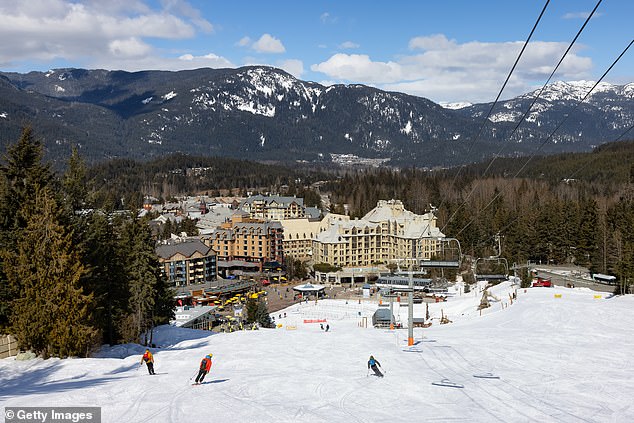 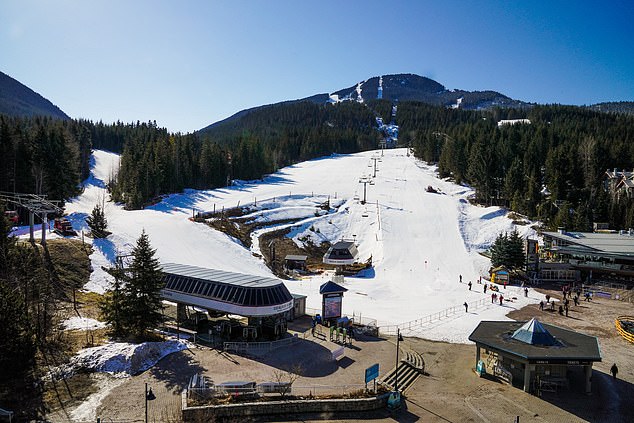 The province of British Columbia has confirmed 877 cases of the P.1 variant, with nearly a quarter of those cases being linked to Whistler (file image)

Whistler hospitality worker, Nora Reid, 22, said she’s unsure which version of the virus she contracted in mid-March, but whatever it was it left her bedridden for several days with intense body pains and severe fatigue.

According to The Guardian, young workers like Reid made up the majority of Whistler’s COVID cases.

The P.1 variant has led to increasing infections in young people and it appears to be more contagious and more capable of reinfecting people than the other variants, experts say.

In Brazil, April is shaping up to be the country’s darkest month yet in the pandemic, with hospitals struggling with a crush of patients, deaths on track for record highs and few signs of a reprieve from a troubled vaccination program in Latin America’s largest nation.

The Health Ministry has cut its outlook for vaccine supplies in April three times already, to half their initial level, and the country’s two biggest laboratories are facing supply constraints.

The delays also mean tens of thousands more deaths as the particularly contagious P.1 variant of COVID-19 sweeps Brazil. It has recorded about 350,000 of the 2.9 million virus deaths worldwide, behind only the US toll of over 560,000.

Brazil’s seven-day rolling average has increased to 2,820 deaths per day, compared with the global average of 10,608 per day, according to data through April 8 from Johns Hopkins University.

The death toll is forecast to continue rising in the next two weeks to an average of nearly 3,500 per day before receding, according to the University of Washington’s Institute for Health Metrics and Evaluation.

EVERYTHING YOU NEED TO KNOW ABOUT THE BRAZILIAN VARIANT

WHAT IS THE VARIANT?

It has the same spike protein mutation as the highly transmissible strains found in the UK and South Africa – named N501Y – which makes the spike better able to bind to receptors inside the body.

A recent study found the P.1 variant made up 42% of specimens taken from Manaus, a large city on the Amazon River.

This is notable because about 75% of the city’s residents had already been infected with COVID-19 by October 2020.

In early April, the CDC revealed the variant is the second-most prevalent in the U.S., accounting for about one percent of cases.

IS IT MORE TRANSMISSIBLE?

Because the Manaus region experienced a devastating surge in cases after most people had already been infected, this suggests P.1. is more easily spread.

Most research estimates the variant is 2.5 times more transmissible than the strain that originated in Wuhan, China.

It does appear to cause more severe illness.

IS IT MORE DEADLY?

There is currently no evidence to suggest the Brazilian variant is deadlier than original ‘wild-type’ strains of the virus.

HOW WELL DO COVID-19 VACCINES PROTECT AGAINST THE VARIANT?

Early data suggest that vaccines do offer protection against P.1, although less so than against other strains.

Public health experts blame President Jair Bolsonaro for refusing to enact strict measures to halt infections and for clashing with governors and mayors who did.

Failure to control the spread has been compounded by the Health Ministry betting big on a single vaccine, AstraZeneca, then buying only one backup, the Chinese-manufactured CoronaVac, after supply problems emerged.

Authorities ignored other producers and squandered opportunities until it…

DMX’s Fiancee Gets ‘Dog Love’ Tattoo to Commemorate His Death

Is it safe to travel this summer or fall? Here’s what experts say

Why Exercise Can Be So Draining for People With Rheumatoid Arthritis

‘Last Resort’ Antibiotic Kills Bacteria by Popping Them Like Balloons